Anxiety is a total fucker. It comes out of nowhere, refuses to listen to reason, and can make even the simplest tasks seem insurmountable.

Case in point: I finally went to the hairdresser yesterday after putting it off for months. I was a badly-needed visit. My fringe had grown past the end of my nose, the ends of my hair were starting to resemble rat tails, and the grey hairs I started to grow at 17 have been pushing their way through with a vengeance.

I’ve hated my hair lately and it’s made me feel terrible about myself everytime I’ve looked in the mirror or left the house. So why did it take me more than two months to just go and get it sorted?

I put it off for so long because it’s something I find hard to face. I’m aware that probably sounds ridiculous but it’s true. First I have to actually pick up the phone and talk to someone to make an appointment. Get through that and the only reward is having to actually visit the salon.

I’m usually convinced that the stylists are judging me harshly for letting my hair get into such a terrible state in the first place. They’re always perfectly friendly and give no indication that they’re thinking any such thing but my brain insists that they’re just very good at acting and hiding their true disgust. I feel the need to apologise for my hair and have been known to invent reasons why I’ve left so much time pass between appointments.

And then they ask me what I want done with my hair. I usually mumble for a bit while internally I’m screaming “I don’t know, I have no idea, I’m not a proper person, please just make me look like a human woman”.  In the end, we just agree that I’ll have the same cut and colour as my previous visit.

Now that all the logistics are sorted, it’s onto the small talk. It won’t come as a surprise that I struggle with this bit. I’m usually determined to try my best but I inevitably turn monosyllabic, like I’ve got a daily quota of words I can say and I’m scared I’ll reach my limit too soon. The stylist usually gives up after a while and we lapse into uncomfortable silence instead.

There’s a brief reprieve when I’m left alone to read while waiting for the colour to take. Once that’s over and my hair has been rinsed, it’s time for the actual haircut and more questions about what I want. How long do I want my fringe? Where should my parting be? When is this going to end so I can go home and drink tea? There’s usually another failed attempt at small talk and then it’s done. I’ve got my glasses off during all this so, when asked if I’m happy with it at various stages, I just smile and nod at the head-shaped blur in the mirror.

And that’s pretty much it. That’s my usual trip to the hairdresser. Sometimes it goes ok, other times my anxiety kicks in and it goes like I’ve just described above. When it’s the latter, I get annoyed at myself for letting anxiety get to me so much and I berate myself for not being stronger, more sensible, more, well, normal.I channel all my feelings into anger at myself for not just getting on with things. And, next thing you know, we’re back in that endless cycle of anxiety again.

If you’re reading this and have never suffered social anxiety, you’re probably thinking that I’m nuts and shouldn’t be spilling my crazy all over the internet. Tough. This is my tiny part of the internet and I’ll do what I want with it. That’s why there are so many Dean Winchester gifs and photos of my cat on here. Writing this has been pleasingly cathartic and is helping nudge me towards seeing yesterday as an achievement rather than evidence of inability to function. 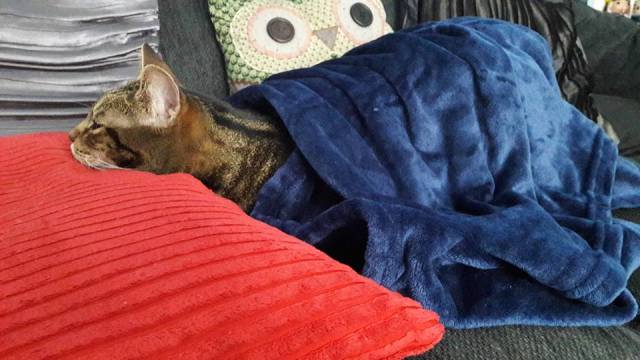 Screw anxiety. This level of chill is what I should be aiming for.

It’s like I said at the beginning of this, anxiety is a total fucker. It turns rationality on its head and makes simple activities and interactions feel like major challenges. I haven’t learned how to banish it yet but I think I’m making a good start by learning to occasionally acknowledge personal achievements rather than failures.

I get stuck in routines very easily and, to break out, I have to force myself to try new things.

I’ve suffered from depression & anxiety for far too long and sometimes, when my brain turns on me, routines can be comforting. Other times though, they can fight for the illness’ team, not for mine.

Depression kicks in and I find myself without the energy or the motivation to try anything new. Far easier to stay inside and re-watch episodes of Community for the tenth time.

(Actually I should have chosen a better example. Re-watching Community is pretty damn sweet.)

Or anxiety kicks in and I lose the desire to try anything new because I know I’ll fail at it. This even extends to reading a new book or watching a film I haven’t seen before. I worry that I won’t understand things, they’ll be too complicated for me to follow, I’ll end up with confirmation of my own stupidity.

I’m not talking about trying to get through Finnegan’s Wake or Ulysses here; plus I have degrees in English Lit. I know my way around a book, damnit. But I let my brain convince me otherwise.

Let’s get to the trying something new part of this post though, I spend enough time dwelling on the down parts as it is.

I want to talk about knitting. I learned basic knitting in primary school but christ did I hate it. Partly because it bored me to tears and partly because all the damn boys got to go play outside or do that night’s homework while us little ladies had to knit and purl like the good future housewives that we were.

It was only a couple of years ago that I became interested in knitting and sewing again. I thought that perhaps a creative outlet could be useful in combating my anxieties. I taught myself how to sew very gradually using a mix of books and online resources. I still consider myself a beginner, maybe an advanced beginner on good days, but I’ve managed to make myself a wardrobe of dresses that I love and wear all the time.

Knitting though. Bastarding knitting. The furthest I ever really got was a couple of scarves. I learned how to knit and/or purl basic straight rows…and that was about it. Attempts at anything more complicated were all met with either failure, confusion, or indifference. Before long, I abandoned it completely and concentrated on sewing.

That would have been that were it not for my innate love of knitwear. Recently I’ve struggled to find nice cropped cardigans to wear with my handmade dresses and got to thinking that maybe making my own was the best solution.

If knitting is good enough for Christopher Walken…

This went no further than idle contemplation for some time – depression was sapping my motivation and anxiety was telling me I was setting myself up to fail again.

Getting started is the hardest part for me. Eventually one night I actually dug out my needles and just started. I made a scarf, a couple of hats and some blankets for the cat. Yes, my cat sleeps under handmade blankets and she likes to be tucked in. It’s freakin’ adorable.

And then I made a jumper.

Yep. An actual goddamn jumper. Now it’s a bit too small, the seams are shoddy as hell, and the wool I used looks like a clown just threw up. But so what? The point is I made a jumper. I took some wool and, using my basic skills, turned it into a garment that someone could wear. I don’t think anyone would actually want to wear it but that’s beside the point. It’s still a skill I can use to barter with come the zombie apocalypse.

I’m still a long way from making the cropped cardigans of my dreams but hey, I bothered to give something a go and I’m slowly starting to see myself making progress with it. I’m struggling to learn how to do colourwork properly and I’m continually defeated by circular needles…but I’m trying. And just the act of trying & pushing myself is helping in some small way to hush up the anxieties.

I’m writing this down for the next day I get frustrated and tell myself that I just can’t do something. And even if I try and fail, at least I’ll have bothered to try.